They call it “le Displacement”

With the goal of rippling or warping water, I’ve turned my attention to displacement/distortion effects. Take a peek at filters → distort to see what’s available. However, before we proceed further, there’s some stuff you have to keep in mind! 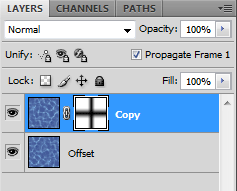 While Photoshop offers a nice list, only few of the distortion filters are useful to us – displace, ocean ripple and wave. Ripple and glass came close, but they have no randomness, so you’ll always end up with a still frame. You can animate them by altering their parameters, but trust me, that won’t give you the effect you’re looking for. Let’s check out wave first.

And that’s the problem. Wave would absolutely do the trick, since it’s the effect we’re aiming for, but the lack of possibility of creating of in-between frames between two states kills it. Either you have to set it up that the effect is barely visible, or it gets twitchy. I’ve used 10% horizontal and vertical scale in this case, with such a set up it’s almost tileable if you have the “wrap around” checkbox ticked.

And here’s the ocean ripple. Not bad, but that’s not exactly what I’ve had in mind, plus it’s not as fluid as I’d like, but that’s due to already mentioned lack of animation possibility.

The displacement filter displaces, duh! :P It’s supposed to make your current layer appear to look conformed to another image, surface, etc. What makes it different from the others, is that you have to provide an image-file (saved in grayscale .psd format), as the “form” for distorting the desired image. In our case we need something that will make our “wave” distortion. How do I get it? I guess the easiest way is to generate it procedurally. I’ve used the Caustics Generator software. The basic functionality of the free edition is enough, however it’s not allowed for commercial use and points a bit of a middle finger to you when you’d like to get the frames of the generated caustic outside of this program, but you can get around it plus I don’t think there’s anybody doing commercial Build engine modding today…

Okay, so 16 alt + printscreens and pastes, single rectangular marquee selection and one image → crop later, here’s our generated caustic, which will serve as the displacement map:

Pretty neat, give it a recolor and you can use it as a water texture by itself if you like! Let’s get it to work as a displacement map for our actual water texture – tediousness ensues! Not that bad actually, but it takes some time.

Next up, open the document with your texture, and duplicate the layer that contains it – as many layers as there are frames in the caustic/displacement map. Instead of actually duplicating the layers, I recommend you select your texture with ctrl + a, copy and then paste it with ctrl+v in rapid succession to save some time. Each copy will be named layer #, so it gives away if you have enough of them. Afterwards, select each layer and apply displace filter with the corresponding .PSD file. Make sure that you have the wrap around checkbox checked and before you proceed with all your layers, try different settings on one first. I’ve used 100 pixels for both horizontal and vertical values. If my displacement maps had less “flat space”, I could safely lower the numbers.

Keeping the process organized will reduce the headaches to a minimum!

Once I’ve made all the frames and scaled them to desired frames, this is how it looks:

It’s more of a ripple, than wavy effect, but I like it. The result all depends on the displacement map you provide – for example, I could overlay another, wider and more blurry, caustic on the already rendered one, but with the frame by frame method, such actions make the whole process more time consuming… With a little more going on in the displacement map, I lowered the displacement amount for a smoother look and I’ve added the caustic frames on top, with the screen blending mode, here’s the result:

This is tiresome, is there another way?

I think this method is pretty easy, but still, it’s time consuming and there’s plenty of “menial work” ;). As I’ve already wrote in another article, Photoshop is not the tool for everything. The second part of this article will cover the faster method and will introduce you to AfterEffects as well, check it out here!