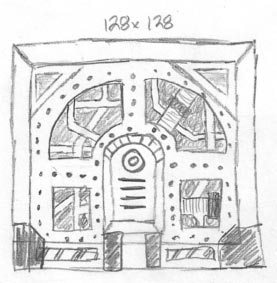 END_OF_DOCUMENT_TOKEN_TO_BE_REPLACED

If you ever worked on a mod for an old-game, or made your own, old-school styled one, I’m sure you’ve had to convert your artwork to an 8-bit, 256 colors max, palette – either because of the supported file format, or you just had to fit the artwork into already established palette. In Photoshop you do this through the image → mode → indexed color dialog. Let’s have a closer look at it, with all options explained.

END_OF_DOCUMENT_TOKEN_TO_BE_REPLACED

Colorizing and remapping with gradient maps

As you might know from my other tutorial, I create ny textures for my old school mods in grayscale most of the time. To add some color to them I use gradient maps, they’re also really great for adjusting the colors of your image to prepare it for 8-bit.