For my example, I’ve used a texture from http://www.texturemate.com/. Let’s take a look at Photoshop’s resize dialog (image → image size) 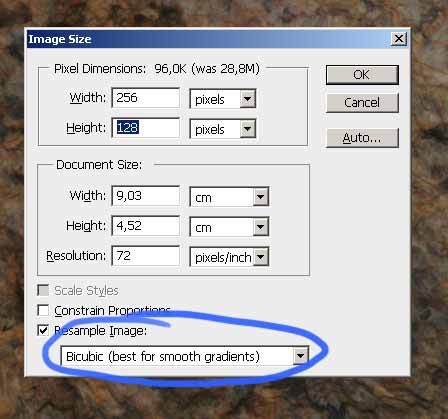 Options and results listed below:

I’m sure most people, for use in old school/low resolution projects, scaled down art used this resampling method since it’s not doing any resampling – there is no filtering at all. While it should work in theory, with things looking nice and pixelly, the end result is just too rough and details start to look like noise – not good at all. Unless you’re resizing pixelart and you don’t want the pixels to be altered in any way, if so, pick this one (or untick the resample image checkbox) and remember to maintain aspect ratio and multiplies like 2x, 3x, 5x etc. :)

Bicubic sharper is the worst choice, it’s plain terrible in my opinion. It looks like a result of bicubic scaling with a sharpening filter applied (Here’s how it works) – not pretty.

Those give the best results, I prefer bilinear to bicubic myself – general surfaces seem smoother while details sharper, in general the details are preserved a bit better, the difference is pretty subtle though. Bicubic smoother is just a blury version of bicubic filtering, the results are less satisfying, so I’m not posting an image of it.

After making it tileable and some paintbrush tool mumbo-jumbo, here’s my result:

Another method of downscaling is to use the Pixelate → Mosaic filter or equivalent – it changes your picture into pixels. Just make sure that you’re texture is double, triple etc. the size of the destination size, and then scale it down to desired size with nearest filtering. 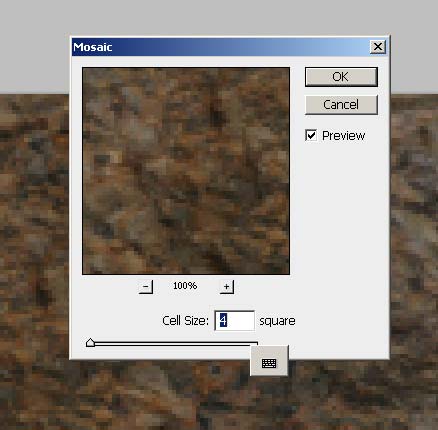 This nets the same results as using the bilinear filtering in PhotoShop, though.

GIMP tip from ETTiNGRiNDER from ZDoom forums. Thanks!

Just did a quick poke around with GIMP, which, disregarding “None”, has “Linear” “Cubic” and “Sinc”. Sinc appeared to have the best effect, but oddly, Linear and Cubic seemed to have reversed effects from what you had with Photoshop (Linear was the blurry one and Cubic was better looking).

PSP tip from Enjay from ZDoom forums. Thanks!

The options in Paint Shop Pro: 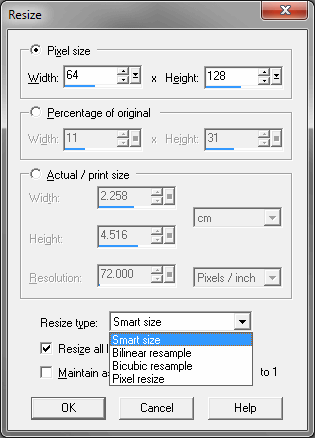 “Smart size”, I think, just seems to pick bilinear if the image is 24 bit or greyscale and pixel if it is 256 colours or less. Pixel resize does no filtering/resampling.