(Screenshots come from Hall of Light and Lemon Amiga game databases, big thanks!)

Fears was the first title which caught my attention. While it doesn’t rip off anything, you can clearly see that Doom was a great influence here. There’s plenty of stuff heavily inspired by Doom like, for example, the floating sphere/face monsters, the shotgun and chaingun weapons, hexagonal tile floors, the tan stained wall texture, horned head decors, the intermission map between levels, pointing where you are with an arrow… But then again, nothing is ripped, all graphics are done well and have a specific style. Lots of smooth pixel art, shame the game can’t be run in higher detail, but it was made this way due to hardware constraints. Engine wise, this is a square grid/cube based engine like Wolfenstein, however, the the floors and ceilings can have varying heights and the cubes can have varying textures at different heights – this makes levels a little more interesting with some staircases and a lot of pits. Despite the cartoony monsters, the dark fog and background ambient music create a somewhat tense atmosphere. 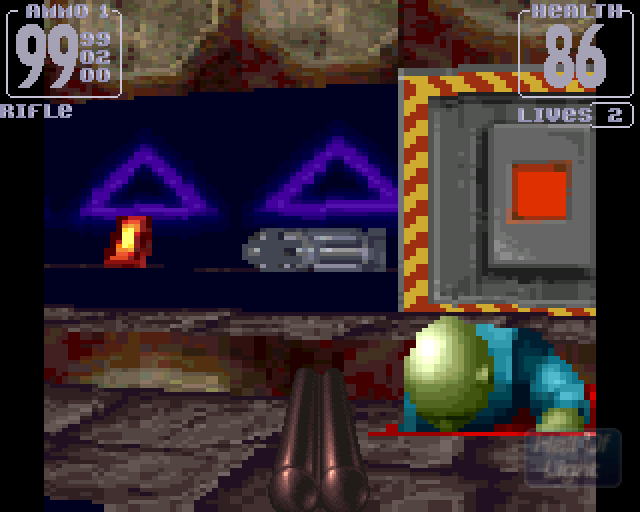 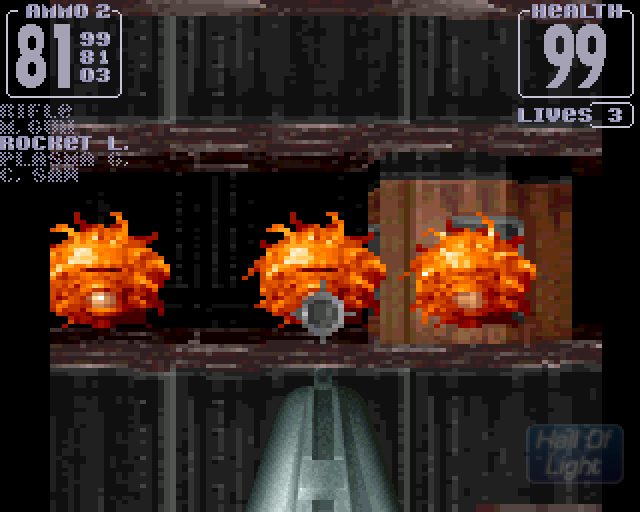 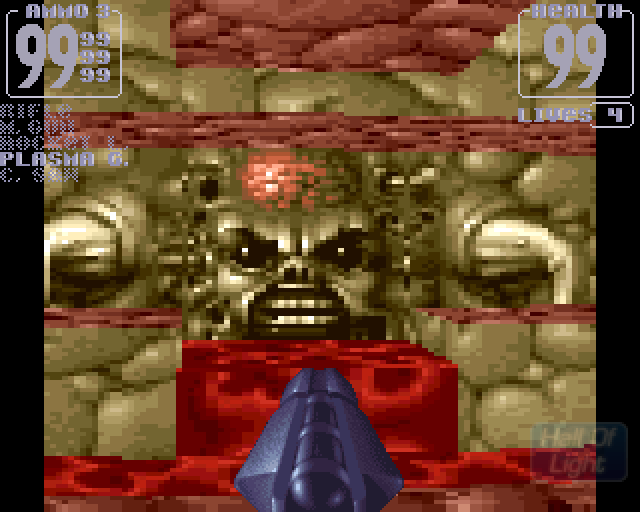 While the title is an obvious nod to Doom, it doesn’t share that many of visual ideas with it, as Fears did. It has a similar theme progression, from techbase through a gothic/castle theme, to end up in hell! Gloom has an interesting graphic style of it’s own, and the textures are low-res, but quite detailed despite that. There’s a lot of cool touches, like glass which tints everything behind it green, Doom-like invisibility, the goggles which show enemies through walls or the basic particle effects, like sparks coming from the plasma impacts, or enemy body parts which litter the floor – and the enemies always explode into chunks. :) The engine doesn’t offer varying floor/ceiling heights, so everything is on the same level. And, while it seems mostly block based, the walls can have varying thickness and be angled (in a limited way, not as in Doom), there’s also level geometry which rotates or slides around. 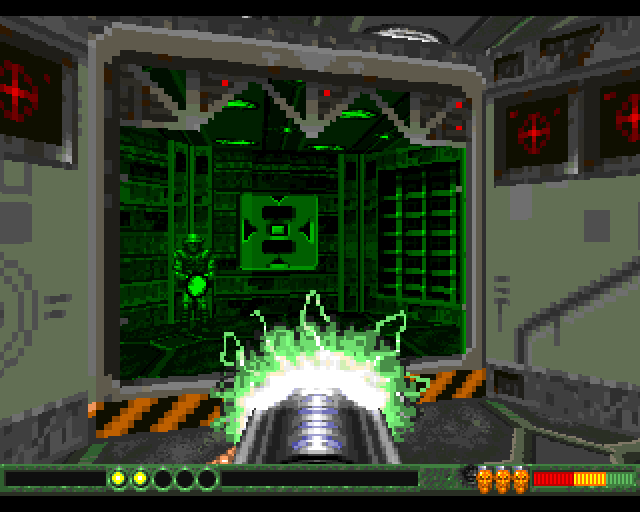 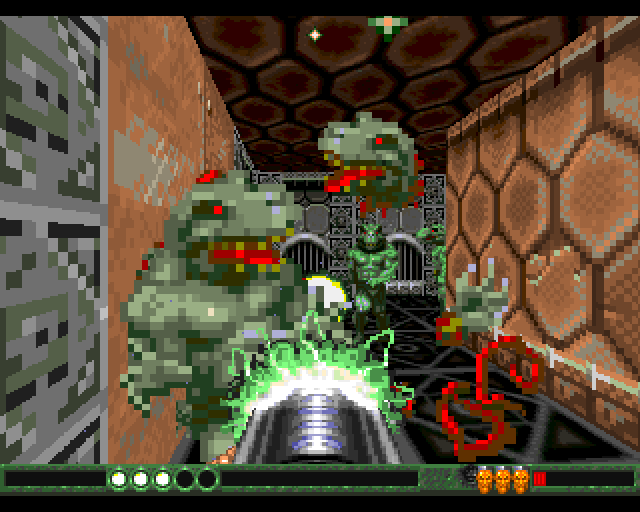 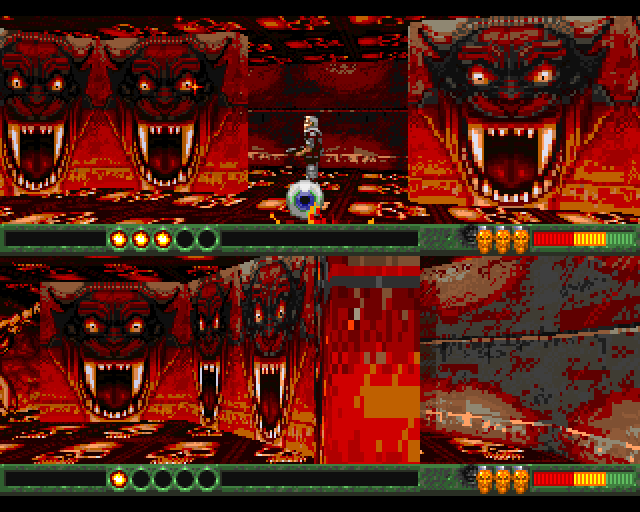 I really like breathless, it’s full of crisp, smooth and detailed textures. This makes the surroundings pretty interesting to look at, even though the maps are pretty abstract. The color scheme is highly themed too – this makes a part of it’s style, but the grays can wear you out after a while. While the general themes are technical, you can see some Alien/Giger inspiration in the late stages’ textures, there’s an Xenomorph knock-off enemy as well. Speaing of enemies, those are pretty generic prerendered sprites, 90’s style. They would look a lot better if they were higher resolution (seems that they’re less detailed than the environment), but I guess that was done because of the technical constraints – the game was pretty demanding already. The engine is pretty close to Doom engine wise, however, it’s still square-grid based. The squares which make up the map are smaller than in most engines of this type, so the levels are a little less blocky. The ceilings and floors can have varying heights and textures too, there are parallaxed skies as well – the outdoor areas are a welcome break from the corridors. The darkness, fog and flickering lights also lend to the atmosphere. 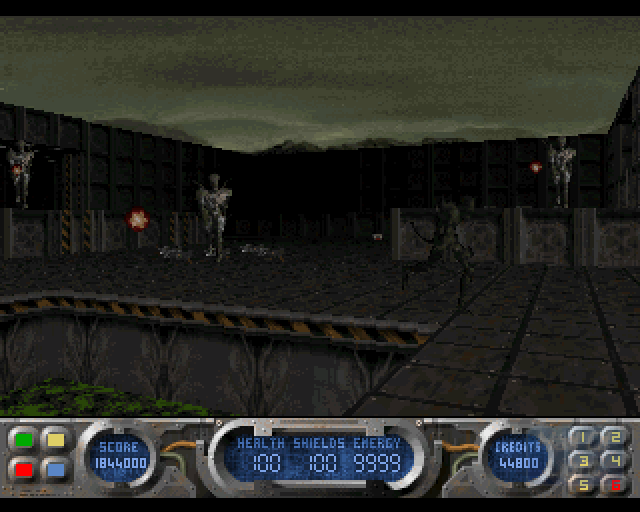 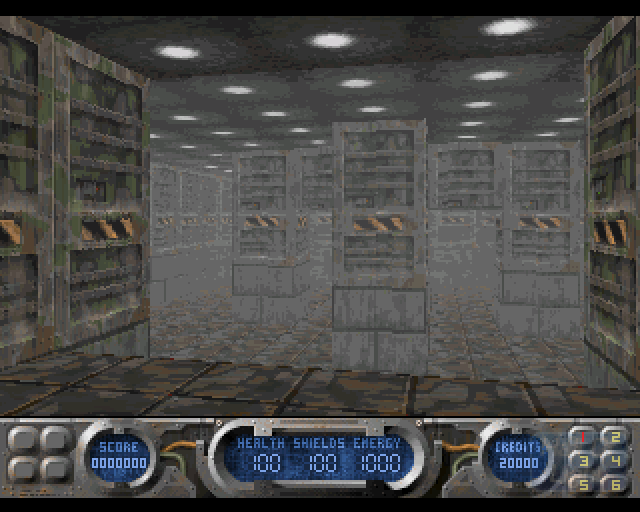 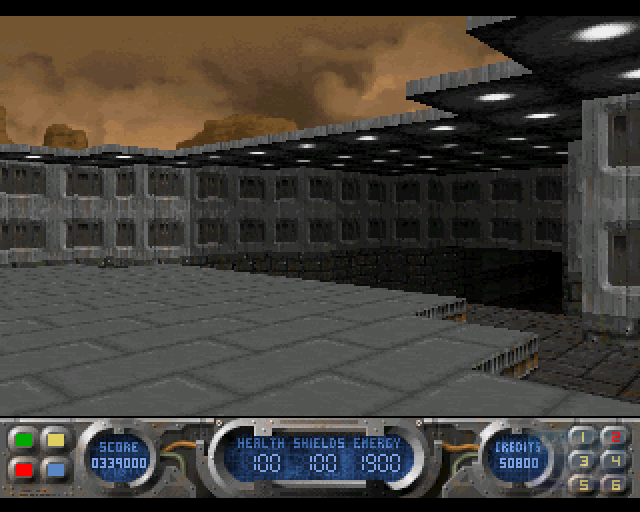 Despite it’s late arrival, technically, Genetic Species is only a little more than a Wolfenstein-type engine. The high-tech theme is pretty industrial and a little clunky here, most of the textures are nicely detailed. The biggest contributor to it’s overall style is the darkness of the levels contrasted with a large number of small glowing lights, teamed up with a lot of painted in, lighting on the textures and a lot of very cool, glowing effects using additive transparency. 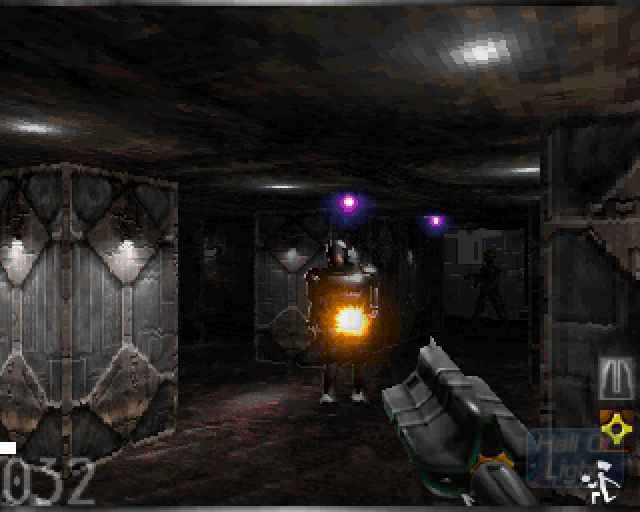 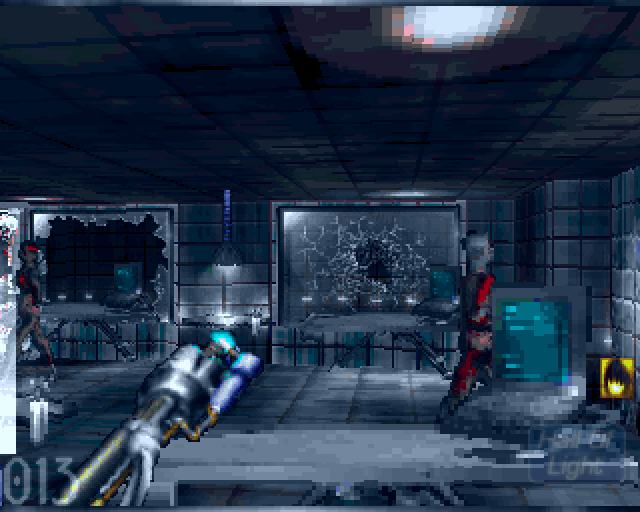 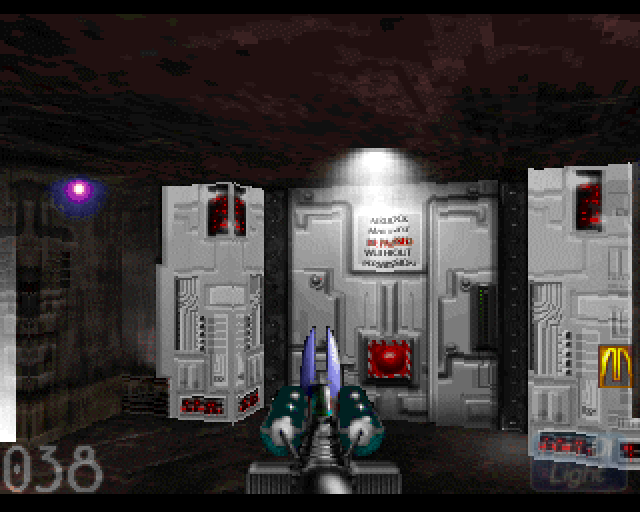 Those are listed here more for technical reasons, since they’re a little less stylish than the other titles I listed IMO, that doesn’t mean they’re bad games graphically though! ;) While most Amiga first person shooters oscillated around the technical level of Wolfenstein, or tried to catch up with Doom, both Alien Breed 3d games surpassed it! Alien Breed 3d has angled walls, ceilings and floors of varying heights, skies/outdoor areas, as well as water pools and underwater areas, complete with a transparent water surface which distorts the view, some nice, gradient based light sourcing and a capability for limited 3d, room over room, architecture – which Doom did not have. The second installment built upon this, with added Quake style features like some point-light lighting and 3d meshes for the player’s weapons and some of monsters. The second game can be run in high resolution too, but it’s very demanding – requires expansion cards for good performance. The overall graphic style reminds me of Bungie’s 1994 Marathon (Mac), albeit a little more abstract. 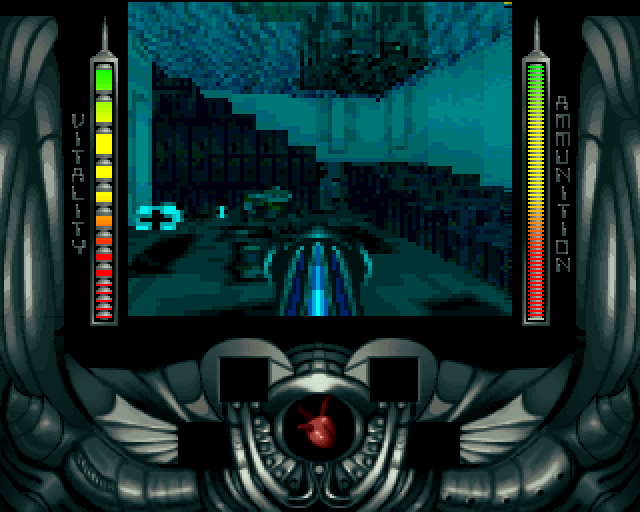 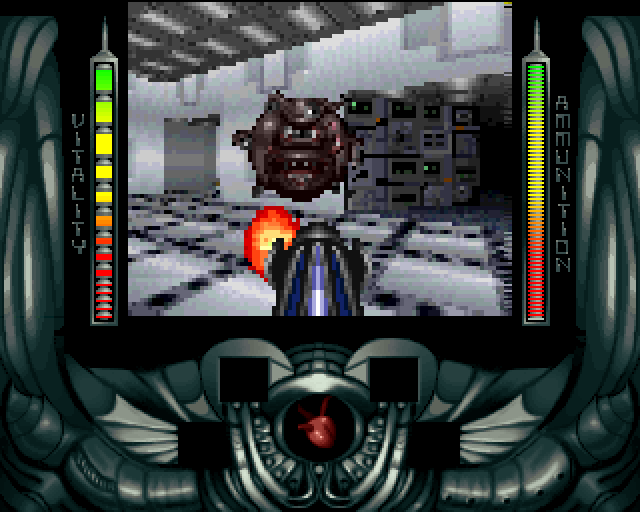 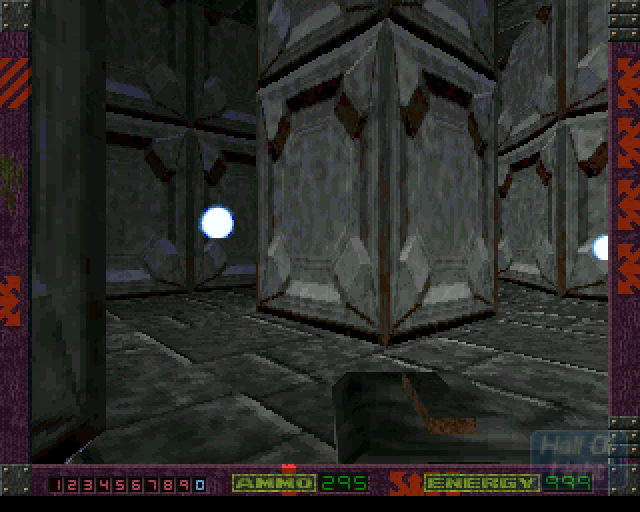 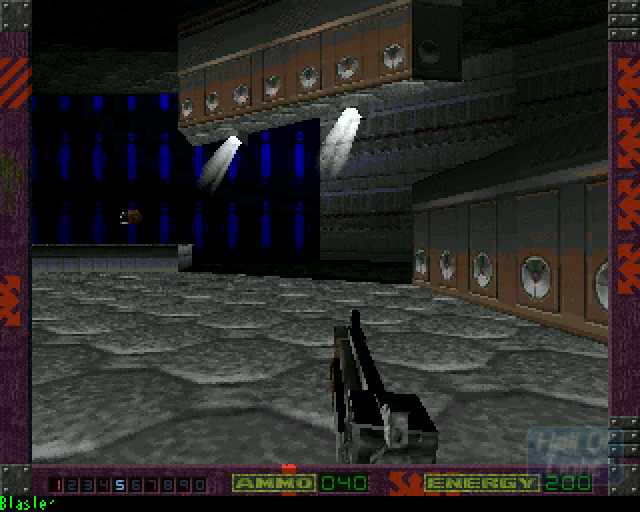 Bonus: I will not go over them in detail, since I consider them visually uninteresting (And featuring ripped graphics, which I frown upon!), but the Trapped 1-3 (1996-1998) games are pretty technically advanced too. The engine features varying celings/floors, sloped surfaces, floating 3d geometry, has light sourcing and uses 3d models for all weapons and monsters. There’s also a lens flare like effect, however the level geometry is bound to a square grid – no angled walls.

"Market sucks, you should wait". Except I'm tired of waiting, especially since my GPU is almost 7 years old. Oh wel… https://t.co/y2bukrlmlx

'No visitors' reads the sign of a witch. New art drop! Genuine NES graphics, for a genuine NES game in the makin… https://t.co/nYAClP3UtA